Celebrity Jersey Cards is a weekly series in which I create virtual trading cards for celebrities wearing sports jerseys. Today, I continue the season-long alphabetical journey through all Major League Baseball teams.

Danielle Lawrie was born in Burnaby, British Columbia and was a star pitcher at the University of Washington. She also pitched professionally for the USSSA Pride. She currently is a broadcaster for Athletes Unlimited, among other endeavors. She appeared with Team Canada in the 2020 Summer Olympics, winning a bronze medal. My interview with Lawrie is at On the Beat With Danielle Lawrie. She was honored by the Toronto Blue Jays and earned extra points for displaying her medal to earn her Celebrity Jersey Card, which also features broadcaster Hazel Mae. On a side note, her brother Brett had a six year MLB career 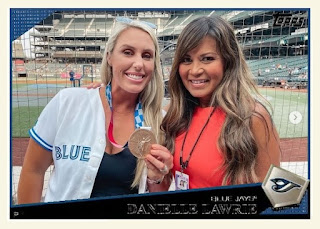 A native of King, Ontario, Rosannagh "Rosie" MacLennan is the 2013 and 2018 World Trampoline Champion and a 2012 and 2016 Olympic champ. She won gold medals in both the Olympics and many other gold medals at other events. She also competed at the 2020 Summer Olympics. MacLennan earned extra points for wearing her gold medal for her first pitch, earning her a Celebrity Jersey Card (not quite as impressive as the medals, but still an achievement) 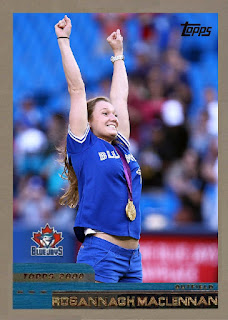