On the Beat With Heather Furr

I first met Heather Furr at a sports convention in 2013. Heather was with a few teammates promoting the Chicago Bliss, a women's pro football team. I interviewed Heather, the first of many I would get with her over the next few years.

The quarterback and a defensive back, Heather was the heart and soul of  the Bliss. Nicknamed “The Rock Star,” Heather always brought swagger, whether she wore a cape for pre-game introductions, chugged a beer after a touchdown or in the face of bigger opponents. Don't let that showmanship fool you though. Heather was completely focused on winning.

Heather was one of the fiercest competitors I have ever seen. Like all truly elite athletes, she had the will to win. The Bliss and Heather never got the respect they deserved around the league. Heather might not have had the strongest arm of the quarterbacks, but her overall skill set combined with her drive made her the best quarterback. No QB brought more to the field than Heather.

During her time with the Bliss, Heather was part of the cast of Pretty. Strong., a reality show featuring the Bliss. She also competed on the Steve Austin Broken Skull Challenge show. Fast forward several years, Heather is now a married mom of a beautiful little rock star and the Director of Residential Sales at McCann Properties.

When Tommy Else and I were discussing potential guests for The Johngy “Or Else” Podcast, I immediately thought of Heather. Having been to a few Bliss games, practices and events, Tommy was familiar with Heather and the team. When I reached out to Heather, she graciously agreed to join us for a fun chat.

We talked about all of the above. We shared several laughs and relived a few fun moments.

It was great seeing Heather again. It was even better seeing her happy and doing well. I have no doubt she will be a success in real estate.

One thing that stood out to me near the end of the interview was typical Heather. We, of course, told her she could promote her real estate business. Heather gave her info, but quickly added she would gladly help anyone with real estate questions or issues, even if it did not lead to business together. There's Heather, the ultimate teammate. When you have a superstar, who is willing to put others first, you have a real winner. Heather is a real winner.

It was a lot of fun catching up with Heather. Above all, I am glad I got the chance to publicly thank her for many good times and interviews over the years. It was really wonderful for me to have that time with Heather yesterday. I hope Heather knows how much I appreciate and respect her for everything.

Tommy and I thank Heather for her time and consideration in our interview. We encourage anyone with any real estate needs to check out Heather online. Check out our interview at On the Beat With Heather Furr. 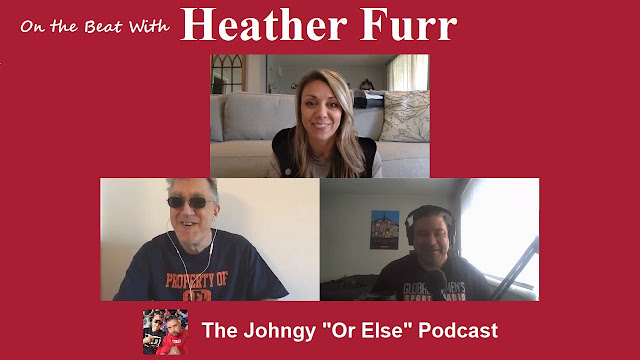