Loyola hosted second place Missouri State and came away with one win. Despite losing the series, it was a solid showing by the Ramblers.

Saturday started ugly for the Ramblers as Andie Broniewicz (3-11) was hit hard, giving up nine runs in 1.1 innings. Loyola's lone RBI was from Amelia Thomas. Despite the final score being 13-3, Loyola was scrappy and did not give up in this game.

The second game was a thrilling 3-2 9 inning win. Ace Peyton Pepkowski (10-8) went all nine innings, allowing one run on six hits, with 13 strike outs. Haley Wallace and Jocelyn Currie had the RBIs. The game-winning run was unearned, but the Ramblers will gladly take it.

After the double header, I talked to Loyola Head Coach Alicia Abbott and Amelia Thomas. I also met Teagan Sopczak during the Home Run Derby. Side note, I did not hit a homer, but I had one nice drive to deep center, but I'll write more about that in the future.

Pepkowski returned to the mound Sunday, but took a loss (10-9). She pitched five innings and only gave up three runs, but Loyola only scored 1, losing 4-1. Sydney Barnett had the lone RBI.

The first game was closer than the score indicated. Loyola had one bad inning. They showed grit in taking the second game. The Ramblers hung tough in Sunday's loss. With just a little more offense, the Ramblers could have taken two of this series.

After the doubleheader, I talked to Coach Abbott and Thomas on the field. The interviews are at On the Beat With Loyola Softball. 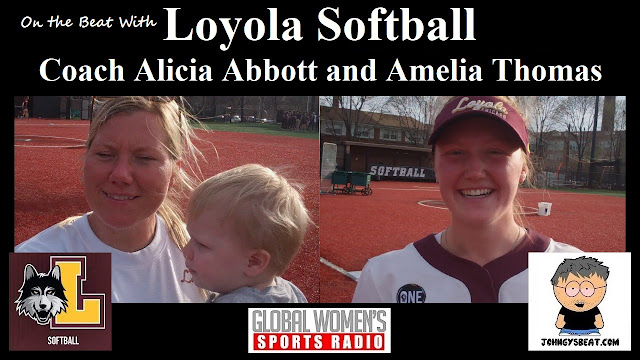