On the Beat With the Connecticut Sun

On Monday, I attended a Connecticut Sun Zoom press session. Coach Curt Miller and players Natisha Hiedeman, Jordan Lewis and Nia Clouden answered questions on a variety of topics, including the offseason, the draft, expectations for the upcoming season and much more. The press session is at On the Beat With the Connecticut Sun - 04/18/2022.

Last season, the Sun finished 26-6, for the best record in the WNBA. They won the Eastern Conference by a whooping 10 games. Unfortunately, they were ousted from the playoffs by the second place Chicago Sky 2-1 in the SemiFinals. The Sky (12-12 in the regular season) went on to win the WNBA title.

Coach Miller is entering his seventh season at the helm of the Sun. He's only had two losing seasons, his first and the ill-fated, short 2020 season. He has an overall record of 111-76 (.597), but has never guided the Sun to the title. In its 23 years, the Sun have never won the WNBA championship.

With the changing of the guard seen elsewhere in the league (Seattle and Las Vegas as examples), can Miller be on the hot seat? Clearly he is a successful coach, but when a team doesn't win the title, sometimes that isn't good enough. I don't know if another season with no title will mean a coaching change, but there will definitely be conversations about that.

Hiedeman is entering her fourth season. After a bit of a rough start to her career, Hiedeman found a spot wit the Sun midway through her first season. Last season, she set or tied career highs in most categories. Perhaps equally as important was the energy she provided both in game and on the bench. She was also one of the looser, fun players in media sessions. As Hiedeman developed her game, she also seemed much more comfortable and confident. After starting five games last season, I don't expect her to start many more, but I see her minutes increasing a bit.

Rookies Nia Clouden (Michigan State) and Jordan Lewis (Baylor) will compete for time at the guard position with team veterans. The two rookies are joined by nine other rookies.

Right now, the Sun have 11 players listed at the guard position, although a few are guard-forwards. The multi-positional players give Coach Miller flexibility in determining his final roster, but about half of those players will not be on the opening day roster.

With established stars DiJonai Carrington, DeWanna Bonner, Jonquel Jones, Brionna Jones, Beatrice Mompremier, Kaila Charles, Jasmine Thomas and Alyssa Thomas pretty much locks for the team, that leaves only four roster spots. The rookies and a few other veterans will fight for those spots. Of course, injuries and other unforeseen circumstances could change that picture, too.

The Sun start the season in New York to face the Liberty. I am confident the Sun will have another successful season, but will it end with a title?

Go to WNBA.com for more info on the league. Also, check here for my recurring coverage. 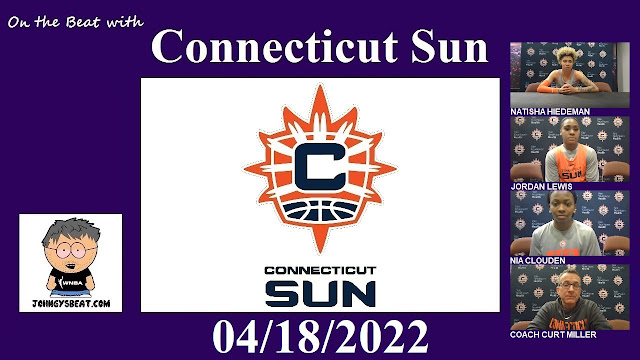