Cards That Never Were is a recurring series in which I create virtual trading cards for players missed in various sets. It is a concept I have borrowed from far too many to thank, but I appreciate all of their efforts.

While I usually only feature my creations, occasionally I rely on creations from others. Such was the case with today's Don Castle Topps 1974 card.

Custom Baseball Cards is a group on Facebook dedicated to these card creations and not just baseball. Lynn is one of the most talented and active creators. Many times when I am attempting to create a card, I find Lynn has already created one.

Castle was selected by the Washington Senators in the first round (eighth overall) in the 1968 MLB Draft. In 1973, Castle debuted for the Texas Rangers. Appearing in four games, Castle went 4-14 with 2 RBIs, a walk and three strikeouts. That would be it for his MLB career. After the 1974 season, he played four seasons in the New York Yankees organization before retiring. 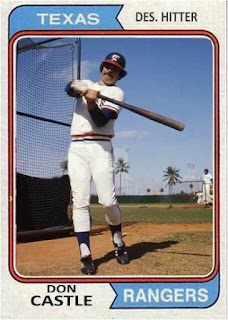