Born in St. Louis, Missouri, Andy Cohen is a successful radio and television show host. Reportedly the first openly gay host of an American late-night talk show, Cohen is a diehard Cardinals and Blues fan. It was while tossing a first pitch for the Cards, that Cohen earned his Celebrity Jersey Card. Will we ever see him in a Blues sweater to get another one? 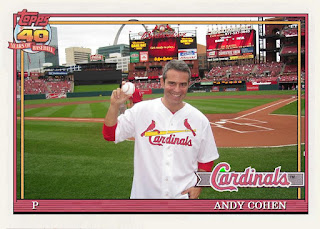 Chuck Woolery is a television host, game show host and musician. He might be most known as the host of Love Connect and also as the first host of Wheel of Fortune, the long-running game show. Woolery actually spent six years as host of the Wheel, but his contract was not renewed after a salary dispute. He also appeared on television's New Zoo Revue. Born in Ashland, Kentucky, the Cardinals were the closest MLB team to Woolery. He gets a Celebrity Jersey Card after throwing out a first pitch. 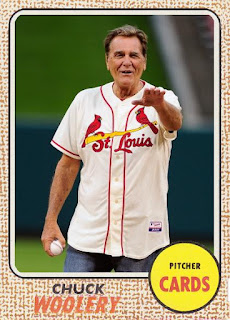