Lexi Held Should Have Been Sky High

It was just one move in the WNBA transactions list. Chicago Sky waives Lexi Held. To me, this represents a wasted opportunity by last season's champs.

A native of Kentucky, Held was a star at DePaul. She regularly lit up Wintrust Arena (also home to the Sky) with her offense, highlighted by gravity-defying passes, and quick hands on defense. Although she wasn't born here, Held is Chicago.

In her only preseason game, Held played six minutes and scored three points, hitting her only shot attempt, with one assist. The Sky lost 92-77 to the Dallas Wings.

Held was a victim of a guard glut and a bad roster decision. As I outlined last week, the Sky had nine guards in camp. Courtney Vandersloot and Allie Quigley are legit stars. That leaves three guard slots (four at the most) for the other players.

Last season, the Sky relied heavily on veterans. They got no starts from players ten through twelve), which isn't unusual. The six players who held the last three spots during the season 2.6 points. One three from Held would surpass that. Only one player among that group averaged more than three (Dana Evans with 3.9 ppg). I'm not saying the bottom end of the roster is meaningless, but those players generally do not play a significant role.

More perplexing is the brief stay the Sky gave Held. She was in camp about a week and played only six minutes in one game. I can only assume they gave her a fair amount of practice time.

Last season, the Sky attendance was around 3,000 depending on the reporting source. They were either second or third in the WNBA with Phoenix leading the pack around 5,900. In the post-season, they averaged around 5,000 fans, although that jumped to 10,000 in the finals (basically filling Wintrust). Adding a “local” player in her home arena probably would have bumped those numbers.

I'm not suggesting teams take a local player just to have one for marketing purposes. Held isn't just a local player. She was a star at DePaul. I am certain she could have produced at least as whoever they pick for the lower end of the roster.

Just signing Held to a training camp contract brought publicity. I already heard from several friends from the DePaul community who planned on buying tickets if Held made the team. Even seeing her sit on the bench in the Sky uniform would have been worth the price of admission. Clearly my circle of friends wouldn't be the only new fans Held attracted.

Putting the obvious marketing possibilities aside, adding a young, hungry player like Held would be a good longer term move. She could learn from Vandersloot and Quigley and grow into a role on the team.

In the end, Held's time on the Sky will be only a footnote on the season. To me, it will remain a missed opportunity for the team. 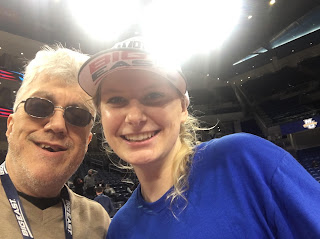