Although technically this is the first year for Fan Expo in Chicago, its roots date back to 1972. What started as Chicago Comic Con became Wizard World in 1998. Late last year, it became Fan Expo. It still was loaded with celebrities, creators, vendors and more.

Fan Expo was a smooth experience form start to finish. As with most such events, for me it started at the press booth. I have known PR Manager Jerry Milani for so many years, we have become friends. He is the top media person of any event. I have dealt with hundreds of PR folks and Jerry is tops.

Once the media pass is in hand, I always take a deep breath, because I get so hyped about the event my head spins.

The celebrity guest list was amazing. I had great experiences with Carl Weathers and Ashley Eckstein, my top two targets, plus an unexpected awesome surprise in meeting David Eckstein, Ashley's husband and a former MLB player.

As usual, I met a lot of creators, picking up cool new sketches and books. It is always fun catching up with the creator friends I made over the years and making new friends.

With the pandemic causing postponements, cancellations and personal issues for attendees, it had been a long time since I saw so many convention friends. I spent a lot of time at Fan Expo just catching up with friends. It was awesome seeing so many, especially back on the convention scene.

I had high hopes for Fan Expo, but as we learned over the last few years, things can change quickly. Once at the convention, I quickly realized Fan Expo was all that I wanted it to be and more. I expect next year and all future years to be even better.

I wrote more about Fan Expo for the Patch and for Global Traveler. I will also have recurring coverage of Fan Expo, including specific encounters with celebrities and creators, here in the future, as I recap Fan Expo Chicago 2022 and look forward to Fan Expo Chicago 2023. For more info and scheduling, go to FanExpoHQ.com. 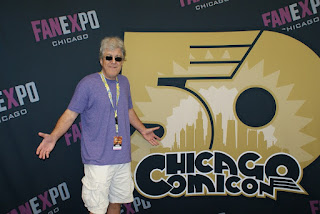