On the Beat With Trevor Mueller

I have interviewed comic creator Trevor Mueller​ several times at comic cons, but they were always short updates on his latest work. Yesterday, I had the chance to do a longer form interview with Trevor to really delve into his career.

Trevor is the writer of the multi-Harvey Award nominated webseries Albert the Alien, among many other works. Albert the Alien intrigued me when I first saw it on a banner at his comic con  booth years ago and not just because it was a cool drawing. There are a lot of alien stories and series out there. It takes something special to make one that really stands out.  Albert the Alien is unique.  It's fun, but it also contains some life lessons. It is an "all ages" book. It might seem to be aimed at youngsters, but the themes in the book can be applied throughout life.

Among his other work is the newly released Nexus Point on Webtoon. It's a few episodes in and it's free. Trevor also talked about Repossessed, his upcoming release on August 10 on Webtoon.

Trevor talked about all of this and more. He discussed his start in comics, making it his career, working with others, comic cons, meeting some of his favorites and more. It was a fun look at Trevor's career.

Over the many years of seeing Trevor at comic cons, I am proud to call him a friend. I love his work and look always forward to new projects. I'll be checking out Nexus Point and Repossessed and I encourage all to do the same.

That interview is at On the Beat With Trevor Mueller. Also check TrevorAMueller.com for more info on all of his work. Go to C2E2.com for info and updates on scheduling, guests and more. 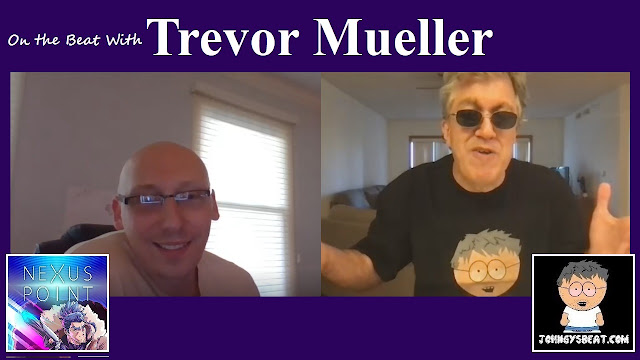