Last weekend, Athletes Unlimited Softball returned to Rosemont, IL for its third season. As always, I was "On the Beat" and loving every minute of the softball action.

As much as I love softball, the best part of the weekend was seeing so many friends again. I caught up with fans, officials and players there, one of whom was pitcher Haylie Wagner.

A star pitcher at the University of Michigan, Haylie started her pro career with the National Pro Fastpitch Pennsylvania Rebellion in 2015. In 2017, she joined the Chicago Bandits, where I had the pleasure of getting to know h, see and interview her.

Pre-game on Opening Night, I wandered to the bullpen area and saw Haylie warming up with catcher Taylor Edwards, another former member fo the Bandits. It was like old times.

Not wanting to bother her, I simply watched her work on a few pitches. As her session ended, Haylie looked over and warmly greeted me. With a lot on her mind, facing her first start of the season in her former ballpark in front of so many fans, I didn't expect anything from Haylie, but her happy greeting made my night. Haylie is all class and definitely a fan favorite.

After the game, I was lucky enough to see Haylie again and grab a selfie. We greeted each other with "Go Blue," in reference to her Michigan ties. Although I have no connection to the Wolverines, I love the Big 10 and it is a fun thing with Michigan alumni.

I'll be "On the Beat" all season at AU. My coverage will be here and on TheEveryDayFan.com. Also check AUProSports.com for more info and updates. 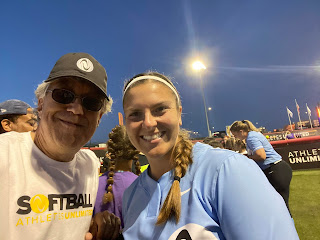