On the Beat With Brian "Crippler" Costello

​Tonight at Four Winds Field in South Bend, Indiana, IAW prsents Clash 22: Rise From the Ashes. Wrestling fans are happy, but nobody is happier than Brian “Crippler” Costello, the man behind the Clash.

A ring veteran of 40 years, Brian rose to fame in 1980s in the (then) WWF. Wrestling legends such as Andre the Giant, Don Muraco, the Ultimate Warrior and countless others, Brian wrestled regularly for several years with WWF.

Although he left the WWF in the early 1990s, Brian did not leave the ring. He took his talents to the independent scene, most notably IAW in his home area of South Bend.

It was in South Bend where Brian started the Clash at the Cove in the late 1990s at Stanley Covelski Stadium, often called “the grandfather of the modern ballpark.” Now renamed Four Winds Field, it is home to the South Bend Cubs, the Midwest League affiliate of the Chicago Cubs. Tonight though, baseball takes a back seat to wrestling, as Brian and many others will work their magic in the ring, entertaining fans with a full night of wrestling.

In its 22nd year, the Clash is back after taking off two years due to the pandemic. The card features Sgt. Jay Peterson battling Brutus Dylan for the vacant IAW Heavyweight title. Also on the card, Crystal White and Sinister Shay grapple to the IAW Women's title. There's an IAW U.S. Title match pitting Andy Chene against William Studd.

Along with making sure things run smoothly tonight, Brian will also lace up the boots again. Brian will team with WWE Hall of Famer Cowboy Bob Orton to defend their IAW Tag Team titles against Pastor Pain and PitBull.

There are a few other excellent matches on the card, too. Plus, all the wrestlers will take part in a meet-and-greet, taking pictures and signing autographs.

I talked to Brian about all of this in our interview yesterday. Even after 40 years in the business, Brian's passion is still strong. You can tell he loves what he does and it shows in the Clash. That interview can be found at On the Beat with Brian Costello.

Brian and his crew run a fantastic show. Dozens of superstars have appeared at the Clash, including Bobby “the Brain” Heenan, Hacksaw Jim Duggan, Ken Patera, the Iron Sheik and many other legends.

I have been to several Clash events and it is always a blast. It amazes me to see all of the larger-than-life wrestling legends still going strong. Meeting all during the night brings me right back to my early years of following wrestling. It is surreal and so cool.

It's also fun seeing the independent wrestlers carving their own paths in wrestling. They are eager to prove they can go with the legends. This produces excellent matches every time.

Having it all on the infield of the baseball stadium adds to the vibe. Every seat is great and the background of the stadium and skyline is awesome.

My schedule does not permit me to make It to Clash 22, but I will be there in spirit. Just because I won't be there, I don't want others to miss the fun. The weather forecast looks perfect. You can't beat wrestling in a baseball stadium on a beautiful summer night.

I thank Brian for his time and consideration. The young wrestling fan in me was excited to talk to the man I watched on television so many times. The older wrestling fan in me thanks him for so many great Clash events and I hope there are many more to come. 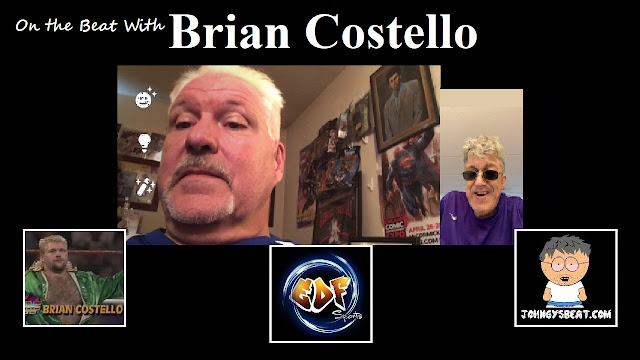