On the Beat With Jonny Nigh and Damien Grey

Both Grey and Nigh are cocky, brash and confident. As tag team champions, they probably have earned that right though. Despite their boastfulness, they gave a look at their careers before and during their time as a team and as part of the Fabulous Idols, led by Joey Roth and Roxi Heart.

Nigh talked about his unusual start in wrestling. While not a lifelong dream, wrestling quickly became Nigh's passion once he got started. Things really seemed to fall together once he joined the Fabulous Idols. His dedication to the group earned him the spot as Roth's second in command.

Outside of the ring, Nigh is a successful musician. He even wrote and performed his entrance theme. That feat puts him ahead of the Road Dogg in terms of musical wrestlers. Several wrestlers have had music gimmicks (The Honky Tonk Man, Van Hammer, Jeff Jarrett), but few have legit music careers.

Holding the other tag team strap, Grey is the less experienced, but equally as bold as Nigh. Grey started our interview by teaching me the way to do a proper introduction. Once he set me straight, Grey talked about his start in wrestling, unfortunately in the Covid era. Still, Grey wrestled when he could, building his match resume.

I asked Grey about soaking it all in. He'll be quick to tell all that fans should enjoy the moment he's in the ring, but he also discussed his emotions. I followed that by asking about fans. As a heel, how does he deal with fans. Once again, Grey gave an interesting response.

Of course, both men previewed Fall Brawl in Joliet, Illinois on September 10. Through a series of events, the Fabulous Idols are in charge of everything. That could lead to anything. More specific to Nigh and Grey, they defend the RPW Tag Team championship against No Coast. Naturally, both agreed they would keep the titles. With the Fabulous Idols in charge, who knows what type of chicanery will be utilized in that match and all night. I know Roth well and he certainly will have a few tricks to play that night.  Even RPW owner Bill Schelli has no idea what might happen.

I will be "On the Beat" at Fall Brawl, covering all the action. Check back here and TheEveryDayFan.com for my recap and other wrestling coverage. 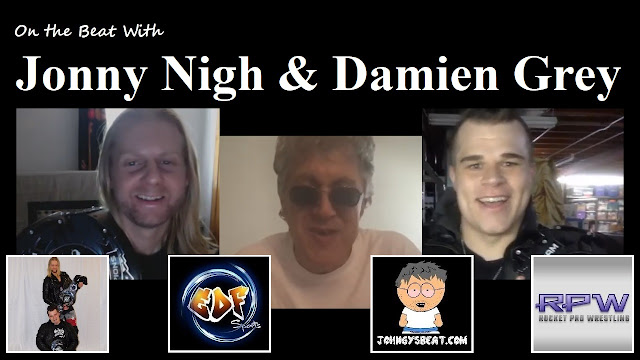