On the Beat With Al Snow and David Vox Mullen

Al Snow made his wrestling debut in 1982. Since then, he has wrestled thousands of matches in hundreds of cities in several; companies, including the WWF/WWE.

Along the way, Al won multiple championships. In the WWE, he held the European title once, the Hardcore Championship six times and the Tag Team Championship once with friend Mick Foley (as Mankind). In 1999, he was ranked No. 52 of the top 500 singles wrestlers in the Pro Wrestling Illustrated PWI 500. The Wrestling Observer Newsletter named Al Most Underrated in 1996.

These days Al runs the daily operations at Ohio Valley Wrestling. Al turned OVW into a legitimate accredited trade school. OVW and Al are getting high praise and rave reviews.

Meanwhile, David Vox Mullen has created his own legacy in the world of entertainment. An actor, producer, singer, comedian and more, David is a force in the industry.

Al and David are teaming up to make a long-discussed idea into a reality. On Saturday, September 3 in Oregon, Illinois, An Evening With Al Snow, with Special Guest David Vox Mullen debuts. Tommy Else and I talked to Al and David to hear all about this new venture.

Five shows are already scheduled through November 11. After the Oregon show, they go to Washington, D.C., Braidwood, IL, Pittsburgh, PA and Memphis, Tennesssee. The Oregon show also features a special meet and greet, with the possibility of adding something similar to other shows.

Al and David talked all about their partnership, how this came to be and where it's going. Al is taking this new path very seriously. While humor comes very naturally to him, he is leaning on David to craft it into an enjoyable performance.

Before we finished, Tommy asked Al about OVW, his training link to Al and Al's appearances on an old Chicago cable show. Al shed a lot of light on the show hosted by Lisa Aprati. Even though the shows were about 20 years ago, if you can find them on YouTube or elsewhere, they are worth a watch. Al was hilarious and the pair had great chemistry. Maybe that was a bit of test for Al, because I expect the same sort of hilarious chemistry between Al and David.

Tommy and I will be in attendance at the Braidwood show. I will have a full recap here. In the meantime, enjoy On the Beat With Al Snow and David Vox Mullen. 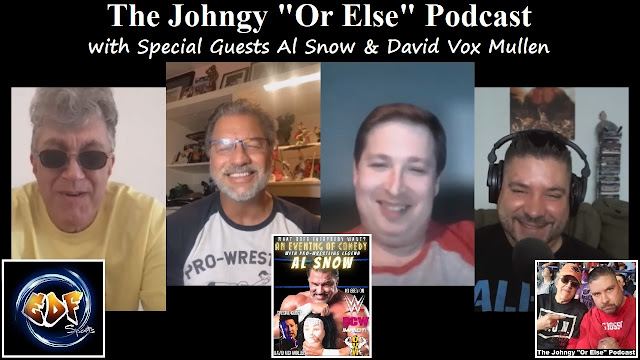