On the Beat With Alissa Dalton

Women's Professional Fastpitch recently ended its debut season. I interviewed Alissa Dalton, who played for the Smash It Sports Vipers. That interview is at On the Beat With Alissa Dalton.

Growing up in Texas, Dalton caught the attention of college recruiters early in her high school years. Recruiters came so early, they surprised Dalton, who relates that story. Eventually, she settled on the University of Oklahoma. After one season at Oklahoma, Dalton transferred to Louisiana.

Dalton talked about having family and friends in the stands and what she hears on the field. Of course, I also had to ask about a defensive gem versus a game winning home run.

When the WPF came calling, Dalton answered and joined the Vipers. Dalton hit .322, good for fifth in the league. She was in the top ten of most offensive categories, often in the top five.

The first season of the WPF was classified as an exhibition, with the Vipers playing the USSSA Pride for most of their games. Each team also played a few other games with teams not in the WPF. The Vipers finished 17-13, while the Pride went 19-10.

The WPF already announced the Oklahoma City Spark will join the league for next season. While nothing has been stated, I am sure everyone hopes for at least one more team to be added for next season. A fourth team would enable better scheduling.

I attended a three game series between the Vipers and Pride in Peoria, Illinois, a few hours south of my Chicago area home. If the WPF doesn't come to me, I will go to the WPF. My friend and I were a bit surprised by the SRO crowd at the games. With neither team being local, we didn't know what to expect, but the thousands of fans rooted for softball, much like I did. We were treated to three fantastic games.

Dalton talked about her first season and the league in general. She states the Peoria experience was typical of all stops on the WPF schedule. A teacher by trade, Dalton staed she plans on returning next season. I put in my plea for a Chicago area team or at least a series around here, but I also promised to go to the closest series wherever it is.

The WPF is softball at its finest. The women are elite athletes, dedicated to playing, coaching and growing their sport.

I thank Dalton for her time and consideration. I look forward to an update interview next season, hopefully in person at a game. Check back here and TheEveryDayFan.com for more women's pro softball coverage. 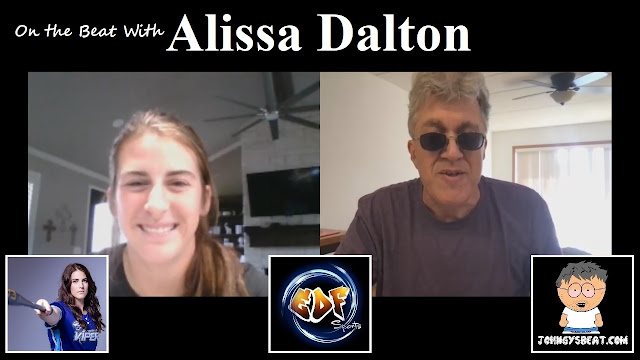