On the Beat With Emma Vanderheyden of the Chicago Blitz

My history with the Chicago Blitz goes back to 2013, when the (then) Bliss played in the newly rebranded Legends Football League. A new chapter was written recently when the Blitz beat the Atlanta Steam to become X League (rebranded from the LFL) champs.

Blitz safety Emma Vanderheyden is one of the players carrying on the legacy created by four time champion coach Keith Hac, QB Heather Furr, ChrisDell Harris and the rest of the Bliss. Sidney Lewis is coaching this new bunch of players, but the results are the same. Chicago is once again champion. I talked to Vanderheyden about all of this in our recent interview at On the Beat With Emma Vanderheyden.

A multi-sport athlete, Vanderheyden is a native of Rockford, about 90 minutes west of Chicago. She is a veteran of football, having played high level flag football and full tackle women's football before joining the Chicago Blitz.

Since, the uniforms have been a source of much discussion over the years, I had to ask Vanderheyden for her thoughts. She pretty much echoed the response I have gotten from previous players.

I always looked at the uniforms as a double-edge sword. On one hand, they certainly are attention-getting. Yet on the other side, they sometimes take attention away from the talent and quality of football being played.

Another regular topic is the amount of games. This season, the X League teams played only two games. While that is a small amount, in the aftermath of the pandemic, at least the league is back on track. Knowing Coach Lewis, it just gave him more time to prepare the Blitz.

Vanderheyden gave her thoughts on the time and effort put into playing just two games. It's right here when her passion really is palpable.

These women have organized workouts for months, but pretty much work out all year, to play the sport they love. Two games is a disappointing schedule, but it doesn't make them any less determined or focused.

Much like players in the past, Vanderheyden speaks of the preparation of Coach Lewis and his staff. That's not just player speak either. I saw firsthand how hard Coach Hac and his coaches worked and I see Coach Lewis doing the same.

I often hear folks ask how and why everyone works so hard for so few games and little recognition. The answer is simple. It's the passion I just mentioned. This isn't a casual activity. This is a mission.

In interviews from the Rockford area when the Blitz played its game there, Vanderheyden spoke about the legacy. I asked her about her place in carrying the banner and helping younger women and future generations.

Lastly, Vanderheyden talked about meeting fans and signing autographs. The first couple times might have been a pleasant surprise, but Vanderheyden and her teammates better get used to it, because fans want their moment with their favorite players.

Along those lines, fans will get a great chance to meet the team Friday, September 23. There is a Blitz championship party at Society on the near west side of Chicago.

Before we finished, we engaged in a little fun banter about championship rings. I flashed my 2014 ring, but soon she will have a shiny new one on her finger and it is well-deserved!

I thank Vanderheyden for her time and consideration. Once again, I congratulate her and the team for bringing another championship to Chicago. Check back here and TheEveryDayFan.com for my recurring coverage of the Blitz. 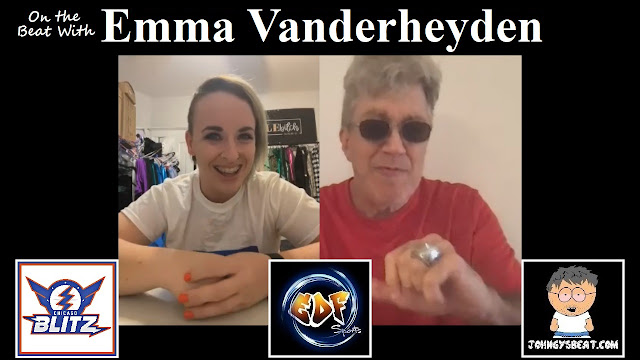