On the Beat With Rabbi Jeremy Fine of 2econd Wreslting

In March, I attended my first 2econd Wrestling show. Flood Zone was an excellent event, highlighted by Billie Starkz winning a tournament to become the first champ.

In July, I saw Walk This Way at Kings and Convicts Brewing Company. Starkz retained her title in an awesome match with Chelsea Green. There were several other great matches, including a fantastic four-way women's match won by Heather Monroe.

When 2econd Wrestling announced Deep Cut for October 27, it was the perfect time to get my first interview with promoter Rabbi Jeremy Fine. Earlier today, Rabbi Fine joined me on Zoom to discuss his young company, which can be found at On the Beat With Rabbi Jeremy Fine.

The interview started with a little football talk. A day after the Chicago Bears won on a rain-sokaed Sunday, we agreed the season was off to a great start. Similarly, as 2econd Wrestling approaches one year, everything is going great.

Rabbi Fine discussed the origins of 2econd Wrestling, including the meaning behind the name. He talked about the debut and the tournament to crown the first champ. Showing respect for other wrestling companies, Rabbi Fine explained his thought process in bringing in talent and selecting venues.

Having Starkz and Blair Onyx in the Championship Tournament was interesting, as was his reasoning. As a big supporter of women in sports, I applaud this. The two women rewarded his support by having excellent, competitive matches.

I was impressed by Fine's mindset. So many times, new wrestling companies debut promising big, game-changing shows. Some even start big, but usually don't live up to the hype or at least not for a long time.

Taking a unique approach, Rabbi Fine wants to be different than other companies, not out of negative feelings, but rather to offer a product fans can't find elsewhere. He's not booking huge names in large locations. He is building slowly, with a long-term plan in place.

I also liked Rabbi Fine stating one of his reasons for starting or enjoying running 2econd Wrestling is the learning process. I've never heard a promoter express that. That thirst for knowledge leads him to carefully choose everything involved in 2econd Wrestling.

Lastly, he discussed Deep Cut to be held at Durty Nellie's. Starkz will defend her title against an opponent to be announced later. Also announced is Charlie Kruel, I wrestler I have yet to see, but who comes with rave reviews.

My friend Tony and I bought tickets the day they went on sale. We were already excited about the show, but after talking to Rabbi Fine, I am even more amped to see it.

As 2econd Wrestling nears one year, the challenge is to keep the momentum. That's what separates the good from the great. I see 2econd Wrestling continuing its trajectory. I'll be “On the Beat” at Deep Cuts and recapping the action here. Check back here and TheEveryDayFan.com for my interviews with the talent from 2econd Wrestling and other wrestling coverage. 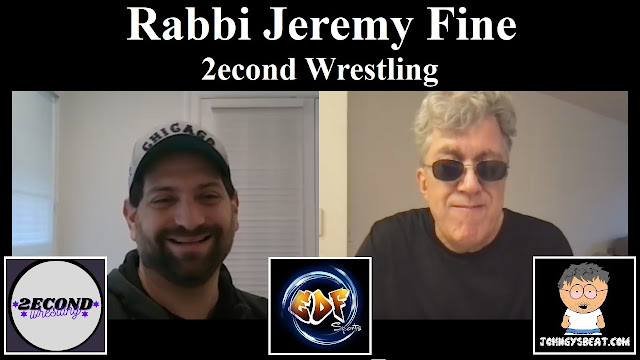