After seeing Haley Reinhart in concert twice recently, I saw her again last weekend. This time it was via Zoom for Talking Music and Travel With Haley Reinhart for Global Traveler.

As well documented here, I am a big fan of Haley. Her Postmodern Jukebox version of "Creep" blows me away. Of course, that is just one of her many amazing performances. Not surprisingly, it would be hard to pick a top song (or even top five), but "Creep" would have to be in the mix.

The interview came together very quickly and easily. Even as I sat on Zoom waiting for the little light to appear notifying me of Haley's presence, I couldn't believe it was actually happening.

I admit, I was a bit stiff, probably from over-rehearsing my questions, and a tad nervous. Honestly, my nerves only kicked in a few minutes prior to the interview. Up until then, I was amazingly calm.

As for Haley, should couldn't have been nicer. She recognized me right away. We briefly chatted, then jumped into the interview, which lasted about 15 minutes. Post-interview, we chatted a bit more. I didn't want to take too much of her time, but I also didn't want to appear like I was rushing. I would have talked to her all day, but I think she had better things to do, especially in Nashville.

We covered several topics, including her start, her musical family, her musical choices and more. We finished with a bit of travel talk (I had to tie it into GT somehow LOL).

Oddly, when it ended, I felt more nervous than before. I think my adrenaline was gone and now I realized how cool this was for me. I hope Haley knows just how much this meant to me.

I greatly appreciate Haley for her time and consideration. I thank her media team for facilitating this interview. I also appreciate the fine folks at Global Traveler for giving me a little creative freedom with my online contributions. This was a bucket list interview for me and one of my biggest ever.

For more info on Haley and her touring, go to HaleyReinhart.com. Check out all my interviews on the Johngy's Beat YouTube channel. 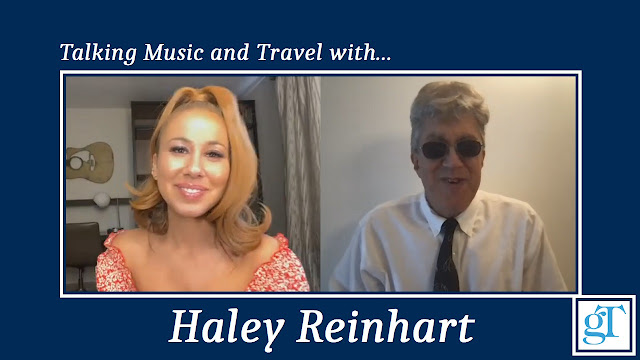