I met Scott Bridges because he owns Bridges Scoreboard, a great sports bar in Griffith, Indiana, near my dad's home. My dad is a regular at Bridges.

The Chicago Bears season isn't going as well as we hoped, but that doesn't stop fans from enjoying the team. Bridges offers a special way to celebrate the Bears through Danny Mac's Friday Tailgate Show, broadcast live there. Longtime broadcaster Dan McNeil hosts a fantastic show all about the Bears and he usually brings a former Bears player with him.

While today I feature Scott and former Bears center Olin Kreutz, the next guest announced is Super Bowl champ Jay Hilgenberg on October 28. Additionally, although the show runs noon-2 pm, Hilgy will stay an additional hour to meet and greet fans.

Follow Bridges Scoreboard on Facebook for more info, including upcoming sports guests. You don't need to wait for a special event though. Their food is top notch and the service is awesome. 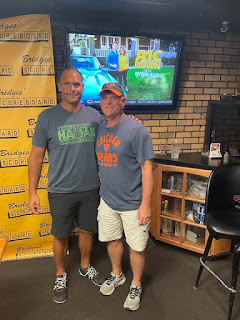 Olin Kreutz and Scott Bridges in Griffith, IN-July 2022.
Posted by Johngy at 6:00 AM