The Johngy "OR ELSE" Podcast Ep. 38: "Hardcore" Heather Owens

A native of Cincinnati, Ohio, “Hardcore” Heather Owens retired from pro wrestling in-ring competition in 2019, but she hasn't strayed far from the ring. Heather segued into different roles in wrestling.

A multi-sports athlete in high school, Heather was trained by Cody Hawk, Les Thatcher and Matt Stryker. After debuting in 2005, Heather earned many titles along the way, including the United Wrestling Alliance/United Wrestling Federation Vixen's Championship seven times. Heartland Wrestling Association named her Woman of the Year in 2006.

Tommy and I first met Heather many years ago when we were all with Resistance Pro Wrestling. Heather was one of the staples of RPro's strong Women's division.

Working the other side of a wrestling show, Heather discusses the new challenges and rewards. She intends Pride! Power! Pro Wrestling! to be a yearly event.

Another yearly wrestling event involving Heather is Squared Circle Expo, a huge wrestling convention which debuted in 2020. Run by Heather, husband Eddie Gonzales (who she married in 2007) and friends Adolfo and Carrie Dorta, SCE is a yearly two-day event in Indianapolis, Indiana.

SCE III runs Friday, April 7 and Saturday, April 8, 2023 at the Wyndham Indianapolis West. Contained entirely within the Wyndham, SCE III will feature all day meet-and-greets, panels, Q&As and more. There will also be full wrestling cards each night. Last year, more than 60 wrestling stars of the past and present were in the guest lineup. Olympic legend and WWE and TNA Hall of Famer Kurt Angle was just the first guest announcement for this year. He is guaranteed to be followed by dozens of great names.

In addition to promoting these wrestling events, Heather has dabbled a bit as a referee, including a match at SCE. She insists she is fully retired from actively wrestling though.

Heather has also co-hosted a couple popular podcasts. Pop Drunk with hubby Ed, features the couple discussing the world of Funko Pop collectibles (of which they have several hundred), beer and other fun topics. The Best Friend Show podcast has Heather and friend Jade chatting about pretty much anything.

While her podcasting has slowed down, all previous episodes are still available on major podcast platforms. All are still relevant, but more important, they are all highly entertaining.

Heather talked about all of this and several other fun topics, like the Cincinnati Bengals, "The Golden Girls" and cats. One of Heather's cats made a cameo appearance, along with Tommy's cat.

We thank Heather for her time and we look forward to updates about both wrestling events. Go to the Power! Pride! Pro Wrestling! Facebook page and the Squared Circle Expo Facebook page for info on those great events. Check back here, The Johngy "OR ELSE" podcast and TheEveryDayFan.com for all of that and more! 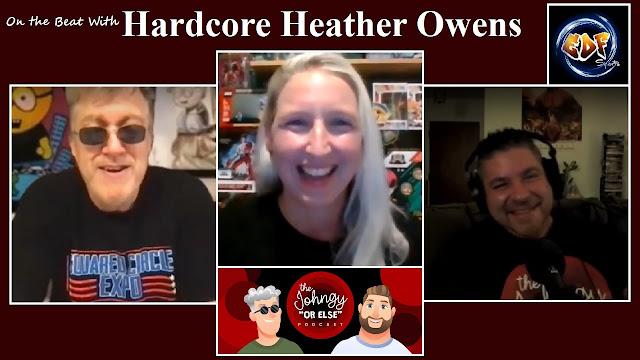