A couple weeks before my recent New York trip, my sister and her husband stopped in New York during a longer trip. While staying in Times Square, they met broadcaster Robin Roberts of Good Morning America. Once again, Jean and Scott beat me on this one. I have never met Roberts.

Roberts rose to fame on ESPN starting in 1990. Her resume is impressive. She was with ESPN for 15 years, was elected to the Women's Basketball Hall of Fame for her contributions, was the first woman of color and the first openly LGBT woman to host Jeopardy! and celebrated 20 years on GMA in mid-2022, among other achievements. More importantly, she is a breast cancer survivor. Roberts is an inspiration to all.

It was a bit of good timing and a bit of patience that allowed Jean and Scott to get the pic with Roberts. Jean gave me all the info I needd to try to get a similar picture with Roberts when I was in New York. Although I was staying close enough, I had a meeting which prevented me from being out there.

Years ago, Jean and Scott saw Howie Schwab of ESPN. Now they got Roberts. One can only wonder who is next for them?

I appreciate Jean sharing the picture, even though I am envious I don't have one. Still, I can experience it vicariously through them. 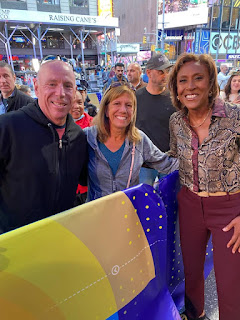 Robin Roberts was so kind to make sure everyone who wanted a picture that day got one ... Such a sweet lady!