Cleveland native Michael Symon grew up to be a successful chef. Symon has been a fixture on the Food Network, The Cooking Channel and elsewhere. Chef Symon i a noted fan of the Browns, often wearing jerseys repping his team. He even wore a Browns jersey on one of his shows to earn a Celebrity Jersey Card. I'm pretty sure Symon is sporting a #17, possibly for ex-QB Brian Sipe, but I'm uncertain who the other guy wearing a New York Giants jersey is. 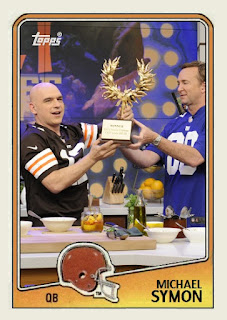 Our most frequent Celebrity Jersey Card star is wrestling personality Velvet Sky. Through her NFVel series, she appeared in jerseys for all teams. I am working my way through those cards, to give maximum Vel coverage. Currently, Velvet is a commentator for the National Wrestling Association. Her #14 is probably for former QB Andy Dalton, but it could be old school Ken Anderson or even older school Sam Wyche. 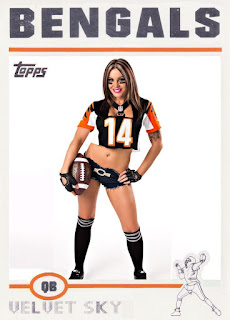