On the Beat With Jordan Lynch

Recently, Chicago's Mt. Carmel High School won another state football title. This morning, I interviewed MC Head Coach Jordan Lynch, which is at On the Beat With Jordan Lynch.

A star with the Caravan, Lynch went on to play at Northern Illinois University. After being redshirted, then seeing limited playing time for two more seasons, Lynch became NIUs starting quarterback in 2012.

In his first year as a starter, Lynch threw for 3,138 yards. He completed 60.2% of his pass attempts, with touchdowns and only six interceptions. He also rushed for 1,815 yards with 19 TDs.

Lynch followed that success with an even more outstanding 2013 season. He completed 62.6% of his passes for 2,892 yards with 24 TDs and eight interceptions. He also rushed for 1,920 yards with 23 touchdowns. He was named a first-team All-American and finished third in the Heisman Trophy voting.

Lynch went on to play pro ball in Canada, winning the 2015 Grey Cup with the Edmonton Eskimos. He retired in early 2017 and was named running backs coach at NIU.

After one season at NIU, he returned to MCHS as head football coach. He guided the Caravan to a state title in 2019 and again this season.

When I contacted Coach Lynch about an interview, I mentioned I was an MC grad (class of '83). He immediately responded positively, texting “anything for an MC brother.” This speaks volumes for the kind of person Lynch is and the bonds built at MC.

Coach Lynch discussed the challenges of transitioning from player to coach. Being just a few years older than his players at NIU made for an interesting situation, one that Lynch relished.

MC is a high school football powerhouse. As a former player there, Lynch knew the legacy. He talked about taking over such a storied program. Ever-humble, he gave praise to his coaching staff, players, families and others. When I asked Coach Lynch about differentiating and remembering specifics about the titles he's won, he responded with the same humbleness.

Recruiting for such a successful program certainly has advantages, but there are also potential drawbacks if players are intimidated. Coach gave his insight into his recruiting mindset.

Lastly, he talked about his current schedule. Coach Lynch and the staff are busy assisting players with college commitments. His season duties didn't end with the championship. He continues being a leader to departing seniors.

I graduated many years ago, but I still follow the Caravan and attend games when I can. I proudly sported my MC sweatshirt for the interview. I am sure I am biased, but there are unqiue lifelong bonds from being part of the MC community and I am sure Coach Lynch would agree. Although he is in an extremely busy time, he cleared time from his schedule for an MC brother and I greatly appreciate it.

We made plans for me to attend some practices next season to get an insider look at the team. Look for that coverage next fall. 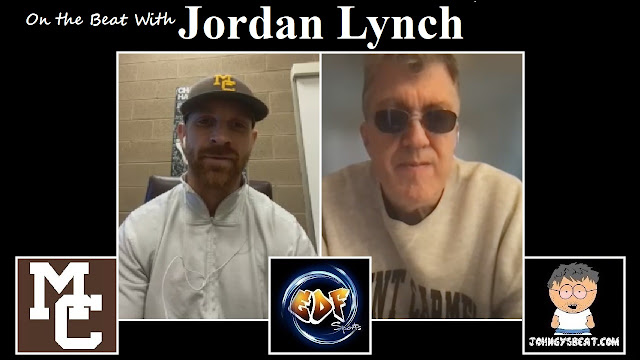