I first met Dirk Manning about 15 years ago in Artist Alley at Motor City Comic Con. While walking down the aisles, scanning hundreds of creator booths, Dirk's interesting banner caught my eye.

Dirk's “logo” was a man wearing a top hat and scarf, which covered the lower half of his face. It was a unique looking banner that stood out in a sea of colorful and creative booth signs.

Approaching his booth, I introduced myself and asked to learn more about this mysterious man. Thus the seeds were sown for a friendship forged at a comic con.

Dirk is a writer and creator of comic series. His works include the supernatural noir Tales of Mr. Rhee and the genre-bending horror anthology Nightmare World. Not limited to fiction, Dirk also is the author of the book series Write or Wrong: A Writer’s Guide to Creating Comics, which started as an instructional column.

Over the years, through many interviews and chats, I learned Dirk is a wrestling fan. A couple years ago Dirk took his writing talent and combined it with his love of comics and wrestling in a collaboration with wrestling announcer Tony Schiavone. The result was Butts In Seats: The Tony Schiavone Story, a graphic bio released last year.

An Amazon No. 1 best-seller, Butts In Seats was a major success. It was the first original graphic novel to be advertised on cable television, thanks to Schiavone's role on All Elite Wrestling shows.

Many wrestlers also lent their support to promote Butts In Seats. Seeing the success and popularity of Butts In Seats, AEW agent and Hall of Fame wrestler Arn Anderson looked to have a similar book. The end result is Arn Anderson: My Life As An Enforcer, a book project in production. Currently in the Kickstarter phase of development, Arn's book is scheduled for release early in 2023.

My podcast partner Tommy Else and I interviewed Dirk about all of this. That podcast is at The Johngy "OR ELSE" Podcast - Ep: 47 Dirk Manning.

Dirk started with a quick recap of his career, before discussing the origins of his work with Schiavone and Anderson. Despite his love and respect for wrestling, Dirk was not going to jump into either project just because both men are wrestling legends. Dirk wanted to be certain of the focus of each book. Of course, the integrity and sincerity of all involved ensured the books would be telling the stories of the real men behind their colorful larger-than-life images.

Started in mid-November, the Arn Anderson Kickstarter program has already passed several stretch goals. There are still 11 days left as of this writing. Dirk explained the pledge levels, including one which rewards backers with several autographed bookplates.

As I said in the interview, Dirk is the perfect person to write these wrestling bio graphic novels. His respect and knowledge of wrestling give him the perfect perspective. With his writing background, he has the ability to pull out the heart of the life stories of the wrestling personalities.

With the sales success of Butts In Seats and the Arn Anderson book Kickstarter program surpassing all goals, I would guess more wrestlers will be calling Dirk. While he is tight-lipped about future projects, Dirk's future is bright. I'm confident he isn't done with wrestling, but also not done with mysteries. There's also the potential ice cream mystery, another project that has rolled around his head and one that includes another of his loves. Dirk is a noted ice cream aficionado and has turned me onto Jeni's, his favorite ice cream place which happens to have several locations near me in Chicago.

Wrestling, horror, ice cream and more, Dirk's versatility is paying dividends and book lovers of all those genres, including me, are loving his work. I bought and love Butts In Seats and I look forward to Arn Anderson: My Life As An Enforcer.

For more info on Dirk and his projects, go to DirkManning.com and ArnComic.com. Check back here for updates, too. 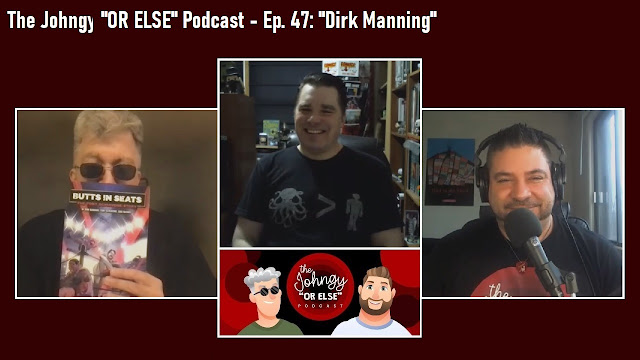 Email ThisBlogThis!Share to TwitterShare to FacebookShare to Pinterest
Labels: 2022, Dirk Manning, Every Day Fan Sports, Interviews, John Wroblewski, Johngy, The Johngy or Else Podcast, Tommy Else