Celebrating a birthday tomorrow, Mariska Hargitay is the daughter of bodybuilder/ actor Mickey Hargitay and actress Jayne Mansfield. She has won a Primetime Emmy Award, a People's Choice Award and a Golden Globe Award, among her many accolades. Hargitay is the founder of the Joyful Heart Foundation, providing support to survivors of sexual assault, domestic violence and child abuse. Far from a figurehead with the foundation, Hargitay is very involved, giving her time, money and other resources. On her Celebrity Jersey Card, Hargitay is wearing #94, worn most notably by former defensive end Mathias Kiwanuka. 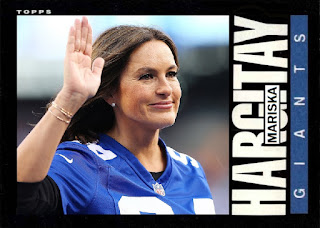 Marlana Aref was a cheerleader for the Bucs before Tom Brady arrived. A biomedical science major at South Florida. At least a three year veteran of the Tampa Bay cheer core, she planned on becoming a doctor, but not much else is known about her. I'm not sure what number Aref is wearing on her Celebrity Jersey Card. Although I am not complaining, I would still have liked to see the old school Bucs jersey. 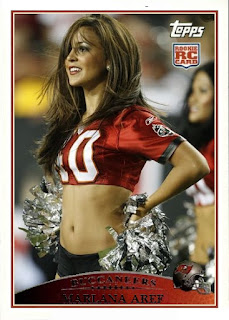