Flashback Weekend is one of the first celebrity conventions I attended on a regular basis. I later learned it is run by Mike and Mia, cousins of my bud Chuck. That means I have been praising this event long before I knew the promoters. Knowing them as I do, it makes it even better to see good people in charge.

I always say Flashback Weekend is a smaller convention with big time guests. Because it is not huge, it has a different vibe to it than the big cons. Mike and Mia do a great job of bringing in a wide range of guests.

A couple years ago, Randy Couture was one of the bigger names. The mixed martial arts master and actor drew long lines, but he made each encounter as special as could be within the time constraints. He was even happy to recreate a fighter pose dozens of times, such as he did with my pal Mitch Ell.

Mitch is a good dude and could probably handle himself okay in a fight, but I feel confident Couture could put a hurt on my pal. Actually, Couture could pribably beatdown Mitch and me together. As tough and menacing as he could look, Couture was great though.

Go to FlashbackWeekend.com for more info on Flashback Weekend 2023. Check back here for my recurring coverage. 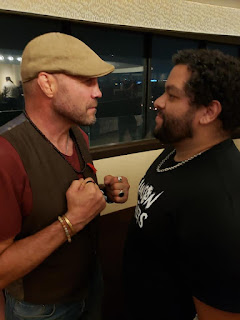 Randy Couture and Mitch Ell is Rosemont, IL-August 2021.
Posted by Johngy at 6:00 AM