Celebrity Jersey Cards is a weekly series in which I create virtual trading cards for celebrities wearing jerseys. Today I feature the two worst teams in the NFL.
George Foreman was born in Marshall, Texas and earned fame in the boxing ring. He won a gold medal in the heavyweight division at the 1968 Mexico City Olympic Games and went on to win two championships as a pro. Younger folks might now him best from the wildly successful Foreman Grill. Foreman earned his Celebrity Jersey Card while cheering on the Texans. Hopefully today, he will cheer them on to victory so the Bears can get the number one pick in the 2023 draft. 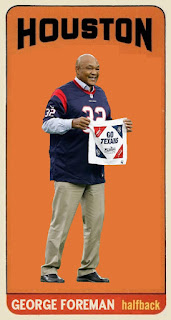 Marcus Kruger won two Stanley Cus with the Chicago Blackhawks. He played his first seven seasons with the Hawks, before playing one season with the Carolina Hurricanes and one final season in Chicago. The native of Sweden scored 37 goals in 472 NHL games. He joined several Hawks teammates, including No. 19 Jonathan Toews, on the sidelines at a Bears game to get his Celebrity Jersey Card. 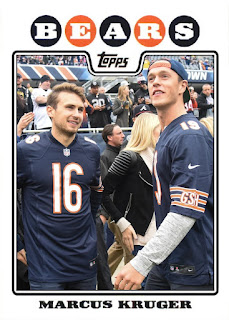