During the holidays, the folks at the Squared Circle Expo gave wrestling fans a lot to celebrate. SCX III is now just three months away and it keeps getting better.

SCX promoters also announced only a few vendor spots remain. Wrestling memorabilia collectors are happy to hear that. Last year, I added a few Roddy Piper pieces I had never even seen before and I hope to find more this year. If you are looking for a wrestling piece, odds are you'll find it here or at least one of the dealers will know how to get it for you.

Another benefit of all the vendors is some of them bring in wrestlers who aren't listed on the official SCX wrestler roster. As big as the SCX lineup will be, the total number of wrestlers present will be even bigger.

The other benefit of two nights is the possibilities of the first night actions causing reactions on the second night. That brings an endless amount of options and opportunities.

I always mention reconnecting with friends at the event. I now have friends coming from seven different states and one other country and I am sure that number will keep increasing. SCX really is THE wrestling convention of the year.

Lastly, I must praise the SCX organizers. These folks work tirelessly to make this the smoothest-running convention possible. From continual social media updates to on-site, hands-on involvement throughout the convention, the SCX team is laser-focused on giving the fans the best time. You won't see these folks posing with the talent all weekend. Sometimes they are so busy they fail to get their own pictures with the wrestlers. It's because the fans come first for the SCX crew.

As always, I will be “On the Beat” all weekend. I locked in my hotel and ticket along time ago. There are still SCX tickets available, but I highly suggest not waiting if you want to go. This will be a sell out. I don't know the Wyndham's rooms availability either, but if there are rooms let, they will go quickly. There are other quality hotels nearby too, though. My advice is to get your ticket, get your room and come on out for a great time.

Go to SquaredCircleX.com for more info on SCX III. Check back here for my recurring coverage. 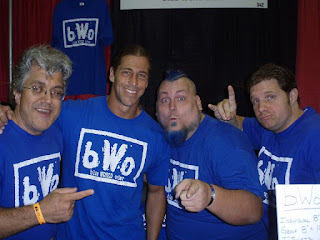 Stevie Richards, Brian Heffron, Mike Bucci and me in Rosemont, IL-summer 2011.
Posted by Johngy at 6:00 AM