Amy Dumas is a retired professional wrestler and lead singer of the band The Luchagors.  As "Lita", Amy held the WWE Women's championship four times and was one of the most popular divas in the WWE during her tenure.
I have met Amy several times and she has been very nice each time.  She is smaller than she appeared to be on tv.  Back in the day, she was a fearless high-flier, who was one of the best female wrestlers in terms of ability and personality.
Amy had a continual line of fans waiting to meet her at Wizard World.  Because of her tight schedule, we were unable to get an interview, but we did learn that The Luchagors were planning on releasing a new album soon.
I love this picture.  It could only have been better if Amy wore a black Johngy's Beat shirt.  Then again, maybe she made the right choice. 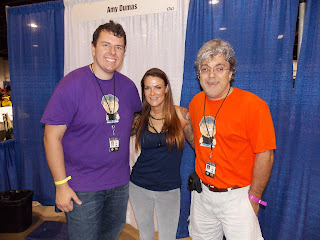 Matt Parker, Amy Dumas and me at Wizard World in Rosemont, IL-August 2012.
Posted by Johngy at 5:55 AM