Bear Down Sunday #7: Bears vs. Panthers

Today the Chicago Bears are facing the Carolina Panthers.  The Bears are 5-1 and coming off of a 13-7 win over the Detroit Lions.  The Panthers are 1-5 after losing to the Dallas Cowboys last week.
The Lions and the Panthers.  Hmm.  Those are a couple of big cats.  (Catch the segue here.)
Staying on the 'big cat' theme, I present James O. Williams (aka the Big Cat).  The Big Cat played for 12 seasons with the Bears.  He started on defense, was switched to offensive line early in his career and started every game for the last 9 years of his career.  Oh how I would love to have Big Cat at right tackle now.
Williams was very cool and laid back when Matt and I met him at Arlington Race Track last summer.  It was crazy hot and he had a long line of fans, but he remained in a good mood and everyone had a good time.
Williams even gave us his thoughts on the toughest Bears defender he faced in practice.  That answer can be found at "On the Beat with James 'Big Cat' Williams."  Credit goes to Contributor Extraordinaire Matt Parker for orchestrating this quickie and for developing the "one quick question" concept.
Oh, as for the game, just like last week with the Lions, the Bears are going to tame the big cats known as the Panthers. 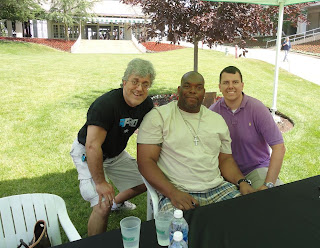 James Williams, Matt Parker and me in Arlington Heights, IL-Summer 2012.
Posted by Johngy at 6:00 AM