This is a regular series which attempts to combine my passion for trading cards with my interest in celebrities.  The result is a trading card featuring a celebrity wearing a jersey.  (Pretty clever, huh?)

Today I am highlighting my two Chicago teams, who once again, will be watching the playoffs, instead of competing in them.  My Sox fans friends cling to the 2005 World Series and I cannot dispute that.  Still, I say that both teams should be ashamed of the product they have put on the field for most of my lifetime.
Minnie Driver's expression seems to sum up the feelings of Sox fan's this year.  What happened?  After leading the division for almost all of the season, the Sox crumbled in the end.  Unlike the Sox, Minnie shows no signs of crumbling.  Her career is going strong after 20+ years, much like Omar Vizquel, whose #11 Minnie is wearing on her Celebrity Jersey Card. 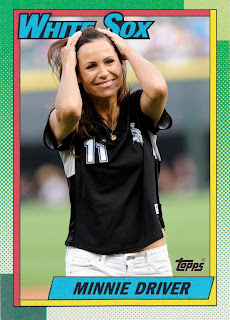 Then there are the Cubs.  I can also ask "What happened?" here, too.  Nobody expected much, but we got even less.  One hundred losses?  Is there any hope?  Well, yes there is.  Hope Solo donned the Cubs pinstripes and gave us something to briefly admire.  If she can win Olympic gold, maybe she can bring some luck to the north side of Chicago.