While in Las Vegas with her husband Scott, my sister Jean ran into Paul Stanley and Peter Criss of Kiss.  Being the loyal sister who she is, Jean immediately made sure to get a photo with the duo.
I know, some people are going to question why Paul and Peter were just walking around Vegas in full makeup.  Hey, it's Vegas.  These things can happen.
One might also wonder why Paul was carrying his guitar and Peter was holding his drum sticks.  Did you expect Peter to carry his whole drum set?  That would be ruidiculous.
Also, where were Gene and Ace?  Well, if the four walked together, they would be instantly recognizable.
Finally, what happened to Peter's tattoo on his upper left arm?  Okay, now you are just scaring me.
Enjoy the picture! 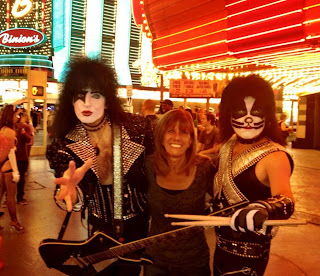 Paul Stanley, Jean Parker and Peter Criss in Las Vegas, NV-October 2012.
Posted by Johngy at 5:55 AM

thats not peter criss. it eric singer with paul stanley

Thank you for the clarification.