Batmobile and Other Bat Stuff

I love how vehicles in tv shows or movies often get names.  The Mystery Machine is from Scooby Do.  The Dukes of Hazzard had the General Lee.  Then again, some were less creative, like the Monkeemobile.
Long before those, Batman's car was named the Batmobile.  It seems way too generic to be cool for Batman to drive the Batmobile.  Actually, in his case, I see the pattern.
The Batputer.  The Batarang.  The Batcave.  The Batpoles.
I guess it would have been too hard to come up with creative names for all of the things.  In a way, "bat-ing" everything is kid of cool.
Either way, the Batmobile remains one of the most famous and recognizable vehicles,  At the various conventions, it is often one of the most popular attractions.  Of course, I had to get a picture with the Batmobile.
Hmm I wonder if I should start calling my Escape the Johngymobile? 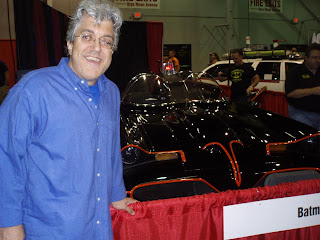 Batmobile or Herbie the Love Bug??

Which would you rather have???

I know for a fact that JAY LENO and Johngy like them both..... and you can find out how I know that here: