This is a regular series which attempts to combine my lifelong passion for trading cards and my interest in celebrities.  On week 12 of the football season, I am featuring a couple celebrity Seahawks in their role as the honorary 12th man.

Felix Hernandez of the Seattle Mariners is only 26, but is within 50 wins of being the all-time wins leader for the Mariners.  King Felix tried to spread his magic to the Seahawks when he was the honorary 12th man flag raiser.  This card design was a tough challenge for me, but I am fairly happy with the final Celebrity Jersey Card. 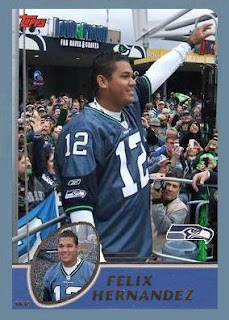 Ken Griffey Jr. is in the top 10 of most of the Mariners offensive categories.  Junior probably could have been a football player, but with 630 home runs, it is probably better that he was only a Seahawk for the purpose of raising the 12th man flag and appearing on a Celebrity Jersey Card. 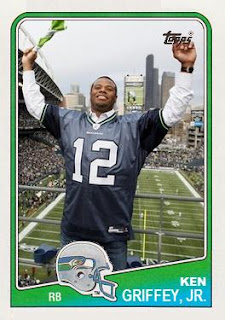