On the Beat with Jocephus Brody

Jocephus Brody is one big and tough wrestler.  I first met him at a Resistance Pro Wrestling event and was immediately impressed with his wrestling ability, his look and his mic skills.  The WWE or TNA could use this guy.
As you all know, I also co-host Wrestle Beat, with Scott Beatty.  Scott was interviewing Brody after one of the shows and the big man decided to have a little fun with Scott.  When the big man decides to have fun, nobody, not even Scott, can stop him, as you will see in the first video.
Contributor Extraordinaire Matt "Big Money" Parker did his usual outstanding video work under the watchful eye of Jocephus and with his approval (or else Matt would be "little money").  After the Wrestle Beat episodes with Eric St. Vaughn and Chazz Moretti, it was fun to see Scott squirm a bit.  Scott was a great sport about it though.  Check it out and help us get 1,000 views for Jocephus! 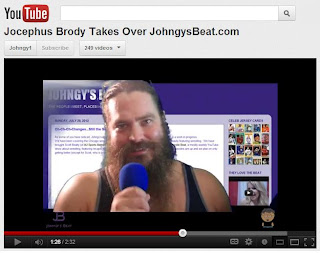 Jocephus wasn't done though.  I knew it was too good to be true.  I was trying to do a recap on our night at Resistance Pro Wrestling when Jocephus interrupted me with a chest chop that might have crushed a lung and definitely knocked out the mic.  Still, the message is clear...Jocephus is very adamant about those 1,000 views, as you will see in the video below.
I predict big things for Jocephus in R Pro.  Heck, I predict big things for Jocephus everywhere.  Personally, I think there is a lot more to Jocephus than the big wrecking machine I have seen at R Pro.  Maybe if these videos pass the 1,000 views mark, Jocephus will do another interview with Scott or me and we can learn more about him.
Until then, watch the video.  In fact, watch it several times and get your family and friends to do the same.  The future of JohngysBeat.com (and Johngy himself) might depend on it.
In late-breaking news, a little battle seems to have broken out between Resistance Pro's Eric St. Vaughn and Jocephus.  According to Eric St. Vaughn's blog, it looks like I started something big between these two.  Stay tuned!
Posted by Johngy at 6:00 AM