This is a regular series which attempts to combine my lifelong obsession with bubblegum cards with my interest in celebrities.  Today I am reminding all that basketball is still being played (even if I have no interest in it).  Back in my day, the Boston Celtics and Los Angeles Lakers ruled the world.

The Lakers honored surfer Kelly Slater's 10th World Title by having him be the guest of honor at a game in 2011.  A native of Florida, Slater has been surfing for over 20 years and is the youngest and oldest ASP (Association of Surfing Professionals) champ.  Slater's jersey #10 is for his 10 titles (although he now has eleven).  Perhaps some team will honor him again and he will get another Celebrity Jersey Card. 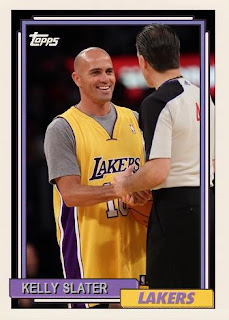 Sergio Ramos is a soccer star, playing for Real Madrid and Spain.  He has won numerous championships, awards, titles and now he is appearing on a Celebrity Jersey Card, which clearly will be his career highlight.  He is sporting Rajon Rondo's #9, although I do not know of any specific connection, other than both are stars. 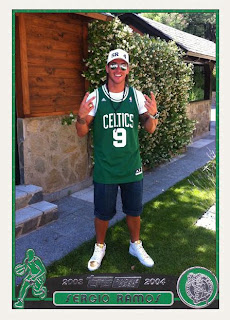