This is a recurring series which attempts to combine my lifelong passion of trading cards with my semi-professional interest in celebrities.  The Chicago Blackhawks won the Stanley Cup.  JohngysBeat.com salutes the champions.

Eric St. Vaughn has been wrestling for a bit over a year.  In that time, he has garnered quite a fan following.  Chants of "ESV" are often among the loudest at R Pro events.  I predict R Pro will debut a midcard title sometime in the near future.  I also believe ESV will hold that title at some point in 2014.  For his Celebrity Jersey Card, ESV is paying homage to WWE's Kane, by wearing the jersey backwards.  Hey, I am not about to criticize him for that.  He can wear his jersey any way he wants. 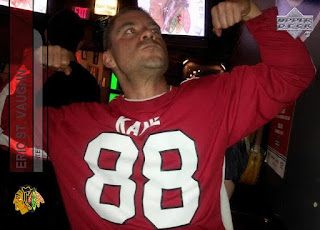 Robert Anthony has earned everything he has gotten in R Pro, including the heavyweight title he currently owns.  "The Ego" is one of the most popular R Pro wrestlers and, like ESV, you can often hear thunderous "Ego" chants during his matches.  Anthony proudly boasts that the arena is "the house that Ego built" and I cannot argue with that claim.  I do take umbrage with him holding a channel 7 mic (even though it makes for an interesting Celebrity Jersey Card).  If he does any reporting work, it should be for JohngysBeat.com. 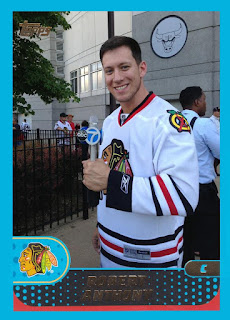