It All Started with Rick Monday

The title says it all, but what does the "all" encompass?  It all starts in my earliest baseball days and it continues to today.
Starting in the beginning, Rick Monday's 1973 Cubs card is one of the first baseball cards I remember, which is really cool, because Monday is one of the first players I ever remember.
Monday came to the Cubs in a trade for Ken Holtzman, a very successful pitcher.  I really liked Holtzman, but I was excited to see Monday jon the Cubs.  It seemed like a win for both teams.  Monday played five excellent seasons for the lowly Cubs, often being one of the few bright spots.
In 1975,  during a game at Dodger Stadium, Monday made a play that would go down in history.  He saved the flag from protesters who were trying to burn it on the field.  This launched Monday onto the national scene.  Of course, in the current age of coverage, we would have tons of footage.  Now we have a precious few videos and still shots.
In 1977 he was traded to the Los Angeles Dodgers for Bill Buckner and Ivan DeJesus.  As much as I hated seeing Monday go, I liked what the Cubs were getting and I was happy Monday was going to a winner.
Fast forward many years and I was looking for interesting pieces to submit to Global Traveler magazine.  My friends and I were going to Los Angeles for our annual baseball trip.  I boldly thought of trying to get press credentials to interview Monday for a story for GT.
I got those credentials and I interviewed Monday, with much assistance from Chuck "Flash" Gekas.  Chuck and I have so many great memories from that scant two hours on the field and in the clubhouse.  It was truly a life highlight.
That story ran online for GT, was read by David Stein on Sporting News Radio and I earned GT's Globility award mostly for that whole series of events.  It also became the impetus for me trying to get more press credentials.  Years later, I have covered several MLB teams, as well as the Chicago Rush, the Chicago Bliss, the Chicago Express and the Chicago Bandits.  Add to that, a few wrestling companies, several celebrity conventions and other fun events.
I am always amazed at the incredible chain of events that started in my youth and continues forty years later. Many people and places played a role, but as I wrote, it all started with Monday.
Happy July 4th to everyone, including Rick Monday, my favorite patriot! 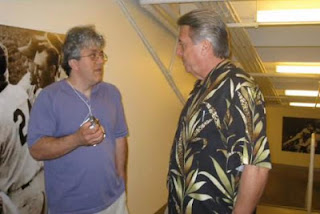