I remember the first time I saw Sid Vicious on a wrestling show.  He was huge and frightening.  The man was a physical monster.  He looked like he could legitimately destroy anyone.
It wasn't until many years later when I saw how tough he really was.  Sid suffered a horrific injury.  He snapped his lower leg while jumping off the middle rope in a match.  It was just a freak thing.  The move itself was not particularly risky.  Sid was just very unlucky.
The video is graphic.  Sid's leg is bent at an abnormal angle.  Sid is wrenched with pain.  This injury ranks up there with the sickest ones I have ever seen in sports.
I cannot imagine sustaining such an injury.  Plus, it was on national television for all to see and the video is all over the internet, too.  It takes a real tough guy to come back from this.
Sid did come back.  He was nearing the end of his career at the time, but he did return to the ring.  Now that is tough
Back in May, Sid made an appearance at Resistance Pro Wrestling.  Once again, R Pro pulled an ace out of the deck.  Sid was gracious and very fan-friendly.  I had the chance to talk to him for a few minutes as he arrived and he could not have been nicer.
R Pro is having their next show on Friday, July 26.  Sid won't be there, but you never know who might show up. 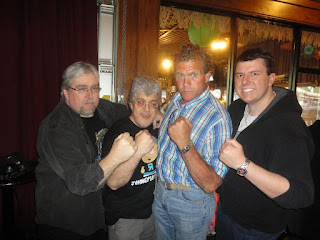 Scott Beatty, me, Sid Vicious and Matt Parker in Merrionette Park, IL-May 2013.
Posted by Johngy at 6:00 AM