This is an odd Friendly Encounter story.  It features Evil Zebra, whom I consider a friend, although we have never actually met, and Melissa Coates, a celebrity, whom I have met (because of Evil Zebra, ironically).  Got it?  Well, I am not going to try to explain it again, so make the best of it.
I have written about EZ several times already (but never enough).  The man is a legend, although who knows who he really is.  He has met a bunch of celebrities, he has been on talk shows, he has been a wrestling referee and who knows what else.  There is some debate within his inner circle about his evilness, but I don't want to get on his bad side and thus will leave it at that.
Melissa Coates also has a lengthy and varied resume.  She has been a body builder, a weightlifter, a wrestler and more.  Our paths actually almost crossed last year at the Motor City Comic Con, but we just missed each other.
Anyway, EZ was so kind (see...more signs of kindness) as to set up a recent interview with Melissa when she was wrestling near me.  Melissa wrestled Dana Adiva (of MTV fame), which then morphed into a match with Melanie Cruise.  After the match, Melissa took time to talk to us for a few minutes.
I had a lot of fun interviewing Melissa.  We even poked the Evil One just a bit.  Not to be outdone, he got me back with his usual sharp wit in his EZ Yahoo group.  You can check out my interview of Melissa at On the Beat with Melissa Coates.
I have my own picture with Melissa and someday hope to have a picture with EZ! 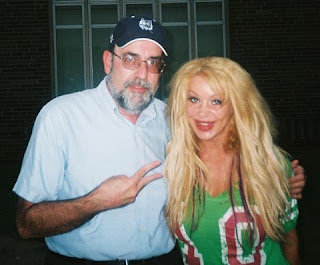 Who the hell taught you how to write an article, you Jay Leno wanna-a-be?

First off, you got the freakin headline WRONG.... it should be:

She was the one who finally got the honor to meet a true legend.... and I know the pleasure was all hers!!

Don't believe one word she told you on that interview, cause she really does love the Evil one, it's just not EZ for her to show it!!

Next time you decide to TRY and write an Encounter, get the Encounter correct!