Lately it seems that my dad has been meeting a ton of sports stars.  Is he starting a collection of his own?  Could he be setting up for a run at JohngysBeat.com?  Could there really be a FrankysBeat.com?
I was starting to feel the pressure.  As Buffalo Springfield once sang, "Paranoia runs deep..."  I could not prevent him from meeting these players.  That would make me look very petty.  My option was clear.  I had to join him.
Gaylord Perry was one of the first baseball players I ever remember.  Perry looked old when he was playing.  I am not talking about the 44 year old pitching for Seattle in 1984.  I am talking about the 33 year old with Cleveland in 1972.  I am sure Perry used that to his advantage, too.  He seemed to use a lot of things to his advantage...cough, cough...spitball...cough, cough.
Gaylord and his brother Jim Perry were the first brother combination I ever knew.  They might have started me on the path of really liking such familial connections.  In 1974 when they were teammates in Cleveland, I thought it was so cool (well, as cool as two old-looking guys could be).  The Perry brothers trail only the Niekro brothers in brother wins.
My dad was going to wear an Astros shirt.  (Yea, now he even tries to dress for the occasion!)  I told him that despite pitching for eight teams, he never pitched for the Astros.  (Score one for Johngy.)
I wondered if Perry would have a multi-team cap, like his multi-team jersey he has been known to wear.  Instead, he wore a Giants cap.  He did pitch 10 of his 22 years in San Francisco.
Actually, it was a very nice night.  We had a fun dinner at Bridges, where the event was held.  My dad knows all of the tricks and had everything times perfectly.  Right after dinner, we waited about 15 minutes and then had our moment with Perry.
Perry was very nice.  I think he enjoyed our father-son combo meeting him.  It is always great meeting a Hall of Famer and doing it with my dad made it extra fun.
Okay, I guess there might be room in this celebrity appearance thing for my dad and me, but I swear, if I ever see a FrankysBeat.com, it will be war! 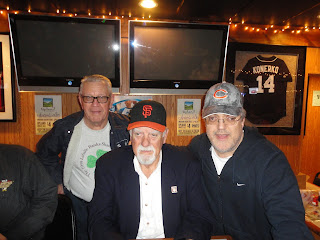 Frank Wroblewski, Gaylord Perry and me in Griffith, IN-April 2013.
Posted by Johngy at 6:00 AM

With that white beard Gaylord looks a lot like my father-in-law, Frank.