The 2013 NFL season is upon us and the Chicago Bears face the Cincinnati Bengals in their season opener.  Last season, both teams finished 10-6.  The general opinion is that Jay Cutler, who is in his free agent year, needs to have a big year.  Maybe he should take lessons from Heather Furr of the 2013 LFL champion Chicago Bliss.  Heather was also named LFL MVP.
I first met Heather in March at a sports collectibles show.  Heather was great and I had hopes of doing a lot of Bliss coverage.  There were some bumps with the website along the way, but it all worked out well and I ended up covering the last half of their season.
I saw Heather Furr lead the Bliss to the championship.  She had amazing chemistry with her receivers.  She was a true team leader.
I hope Cutler follows the blueprint.  I hope the Bears follow the Bliss.  If Cutler has a season remotely similar to Furr's, Chicago fans could be in for a lot of fun this year. 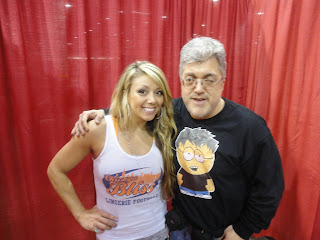 Winning the season opener is a great start for the Bears!