On the Beat with Resistance Pro's Positive Outreach Program

JohngysBeat.com is all about meeting celebrities.  Over the years, I have written about hundreds of celebrities.  Today, I am writing about being with a music legend, two wrestling company owners and several wrestlers, but more important than that, I was with students from the Southside Occupational Academy for the debut of the R Pro Positive Outreach Program.  The full report, including an interview with C Red, the man behind POP, can be found on the Patch at On the Beat with Resistance Pro's Positive Outreach Program.
R Pro's Creative Director Billy Corgan (also of the Smashing Pumpkins) believed in POP so much that he took time from his insanely busy schedule to be there and speak.  R Pro owners Jacques and Gabriel Baron were both there.  Wrestlers Eric St. Vaughn, Matt Knicks, Marshe Rockett and Suge D were also joined by Michael Bradley and Stoney McGee (both of many roles within R Pro).  This was a large assemblage of talent and all believed enough in the cause and in R Pro to make this happen.
The goal of POP is to be a positive force in the community.  I have seen for the last two years how things don't begin and end with the ring of the bell.  It might sound cliche, but R Pro is really one giant family.  People don't just show up for wrestling and then leave.  We see each other, talk regularly, support each other and do the things that a family does.  I have never felt more accepted by any organization.
The goal of POP and R Pro was to be a positive in the lives of these students (and others in the future).  I gave a bit of my time and walked away feeling more positive than I ever had before.
Thank you C Red.  Thank you R Pro.  I love you all. 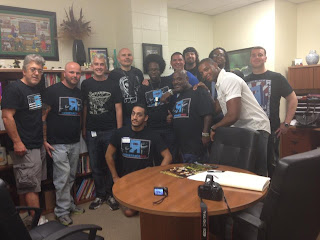 The Resistance Pro crew in Chicago, IL-September 2013.
Posted by Johngy at 6:00 AM

Always nice to see how people can come together and help out!