Ashley Massaro was a Diva, a Bunny, a Survivor and More

Ashley Massaro was the winner of the 2005 WWE Diva search and remained with the WWE through 2008.  She was also on Survivor and has done other acting and modeling.
I give Massaro credit for quitting the WWE to care for her daughter.  I am quite sure she could have had several more successful years with the WWE, but her daughter was more important to her.
I never have cared for WWE "divas."  I like attractive women, but have no real interest in seeing them in wrestling, unless they actually wrestle or manage a wrestler.  Eye candy rolling around in the ring is not my idea of entertaining wrestling.
While Massaro was a "diva," she did attempt to learn how to be a wrestler.  She studied tapes of Molly Holly (aka Nora Greenwald) and was trained by Trish Stratus, Ricky Steamboat and Fit Finlay.
Unfortunately, Massaro did not accomplish much in the ring during her stay in the WWE.  Granted, she wasn't there that long, but the WWE had a lot of great women wrestlers at the time.
I met Massaro at Days of the Dead.  She had a nice variety of pictures for sale and a signed and kissed baseball.  I don't really know where the baseball fits.  Most similar "divas" have lip print cards for fans of that stuff.  The signed and kissed baseball was an interesting item though.  I should have asked about it.
In any case, Massero can be seen at conventions around the country and I am sure she will be doing more acting and modeling.  For updates, you can follow Ashley Massero on twitter. 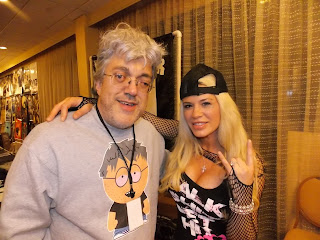 Ashley Massaro and me in Schaumburg, IL-November 2012.
Posted by Johngy at 6:00 AM