This is a regular feature which attempts to combine my lifelong passion for bubblegum cards with my semi-professional interest in celebrities.  With the football season 1/4 over, the Seattle Seahawks are 4-0 and have the highest ranked team in the NFL.

Actor Tom Skerritt was born in Detroit, but now lives in Seattle.  I can certainly understand his thought process there.  Skerritt was the honorary 12th man at a Seahawks game.  The 12th man is a ceremony the Seahawks have to honor their fans (the 12th man).  This explains the #12 jersey on his Celebrity Jersey Card. 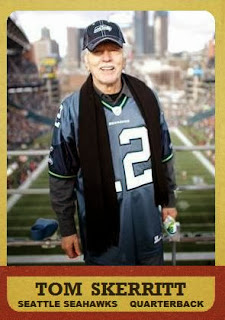 Nate McMillan played 12 excellent seasons with the Seattle Supersonics.  He also coached them for another 5 seasons.  Eventually, he left Seattle to coach the Portland Trailblazers for another 7 seasons.  Despite his time in Portland, McMillan will always be affiliated with Seattle.  He received a warm welcome when he raised the 12th Man flag and earned his Celebrity Jersey Card. 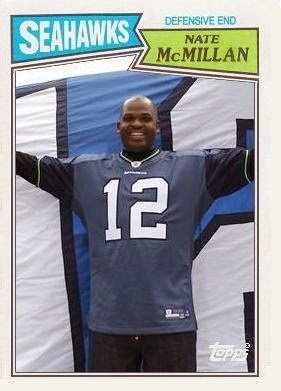