Here is another odd Friendly Encounter.  I actually met the celebrity before I met my friend.  In this case, the celebrity is Sean Waltman, also known as XPac.  The Two Star Heroes should also get celebrity consideration, but more on that later.
I met Sean Waltman at a Resistance Pro Wrestling event several months ago and the resulting interview can be found at On the Beat with Sean Waltman.  Waltman put on a great match that night and was a great guy from all accounts.  Hey, he did our interview, which makes him okay by me.
At the last R Pro event, I met Coach Joe Phelan.  Coach Joe and R Pro put the event together as a benefit for his Badgers wrestling team.
While I figured that Coach Joe would meet all of the stars of R Pro and Waltman, too, I somehow never guessed he would be in an actual match and get the pin!  To the delight of the crowd, Coach Joe made his pro wrestling debut, alongside Waltman and the Two Star Heroes and the foursome won!  Coach Joe is now 1-0 in his pro career.
The Two Star Heroes (Matt Knicks and Chris Castro) are also pro wrestlers, although they have not yet achieved the success that Waltman has.  Of course, the Two Star Heroes are much younger and just at the start of their careers.  I really enjoy their work and I enjoy them as people.  They are just good guys.
The picture below shows the end result of the match.  It was a great moment.  Coach Joe deserves to have his hand held high and not just because he won a match or met some wrestlers.  Coach Joe is a great guy and a fantastic coach.
This Friendly Encounter is about a lot of things.  Most importantly, it is about helping others.  Everytime I look at this picture, I remember the night and simply feel good about life. 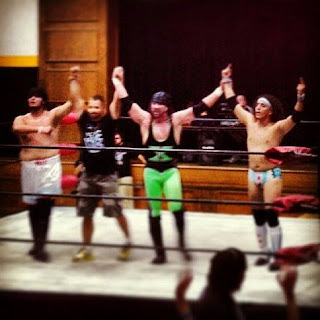 Chris Castro, Joe Phelan, XPac and Matt Knicks in Burbank, IL-September 2013.
Posted by Johngy at 6:00 AM