John Cena's trademark "You can't see me" seemed like a taunt at Wizard World.  Neither my press credentials nor my official video blogger status could get me very close to the WWE superstar last year.
Cena is huge, both physically and in star status.  He was clearly the biggest draw at Wizard World. He signed and posed for an evening shift and when he was announced, the place went insane.  I swear it felt like the convention center shook.
Cena is about as close to a modern day Hulk Hogan as it gets.  He has won numerous titles, including the WWE Heavyweight title ten times.  He does lots of charitable work and has starred in a few movies.
Some wrestling fans dislike Cena calling him stale or griping about his "Super Cena" status and his "5 moves of doom" in-ring abilities.  I like Cena.  This is wrestling.  He works with what he is given and he works hard at everything.
I got quite a few interviews and even more pictures at Wizard World.  Unfortunately the pictures below were about the best I could do with Cena. 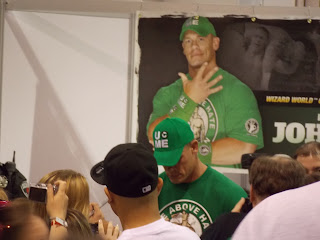 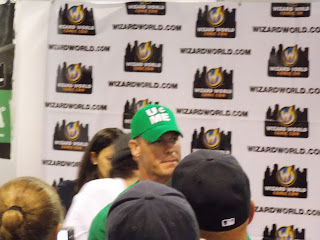