The Chicago Bears are 6-6, in second place (in the NFC North) and coming off a tough overtime loss to the Vikings.  The Dallas Cowboys are 7-5 in first place in the NFC East.  These two teams will meet tomorrow night.
The Cowboys play the Bears?  That means one thing...Mike Bucci.
Bucci is a HUGE fan of the Cowboys.  I am a big fan of Bucci.  Tomorrow all of that fandom converges on the field.
I first met Bucci at Wizard World in 2011.  Wow how time flies.  I interviewed him about his wrestling career and I had no idea of his connection to Resistance Pro, which would make its debut a couple months later.
Bucci was a very talented wrestler and still possesses a great wrestling mind.  I have heard nothing but praise by everyone who has ever worked with him or even known him.  He is a class act all the way.
He has not appeared at R Pro in over a year and I miss him.  Oh sure, I can follow Bucci on Facebook and read his updates (many of which concern the Cowboys), but it is not the same as talking to him.
I genuinely like the guy, but football is a different story.  Sorry Bucci, but tomorrow night I will be cheering for my Bears.  I am sure I will see your posts (good or bad) throughout the game.  I will smile and think about the fun interviews we did.  I hope you make a return to R Pro.  I'd love to see you again and talk some wrestling and football. 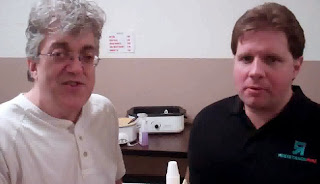