This is a regular series which attempts to combine my lifelong passion for trading cards with my semi-professional interest in celebrities.  Today I am saluting Super Bowl XIV which saw the Steelers beat the Rams.  I have no real reason other than to showcase two lovely ladies.

Native New Yorker Thea Trinidad has wrestled under several names during her career, including Rosita when she posed in the Steelers jersey.  She was ranked #31 of the best 50 female singles wrestlers in the PWI Female 50 in 2011.  She was also a TNA Knockout tag team champ (with Sarita).  I don't know of any connection she has with the Steelers, other than her hair resembling the mane of the great Troy Polamalu.  (I like Trinidad's better.)  Maybe that is the reason she is wearing his #43 on her Celebrity Jersey Card.  I have not met the lovely Thea, but someday I hope to see her at a wrestling event! 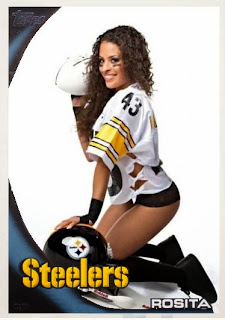 Traci Brooks is a native Canadian.  She has won numerous singles and tag team titles during her wrestling career.  I know of no connection to the Rams for her.  I am guessing the #80 is for Isaac Bruce, but if it was up to me, I would claim Bob Klein.  That just shows I am old school.  If the beautiful photo is not enough, Brooks gets extra credit for posing with a football for her Celebrity Jersey Card. 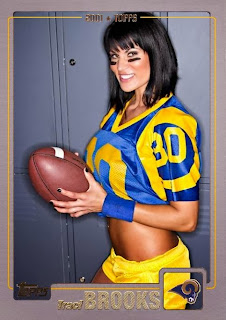