This is a recurring series which attempts to combine my lifelong passion for trading cards with my semi-professional interest in celebrities.  Today, I am featuring the NFL's worst regular season teams in each conference.

Rasheed Wallace is a native Philadelphian, which might explain his choice of Donovan McNabb's #5 Washington jersey.  Coincidentally, Wallace played for the Washington Bullets for his first season.  Either way, I always like the cross-sports Celebrity Jersey Cards.  Wallace would have made for an interesting quarterback (or perhaps defensive tackle or offensive line or tight end...). 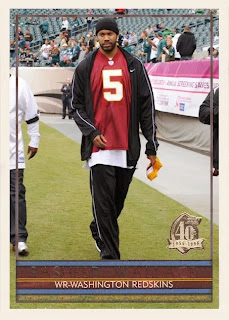 Robert Van Winkle was born in Texas.  He morphed into Vanilla Ice, but apparently did not leave his Texas roots behind.  I would give him extra points if his #1 was for punter Matt Turk.  Instead, it is a custom "Vanilla Ice" jersey, which the team probably gave him.  I will give him an extra point for the Texans cap visible on his Celebrity Jersey Card. 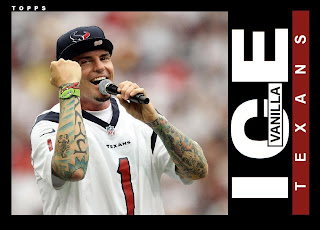 That Vanilla Ice card is siiiiiiiick!