I have been a fan of Heather Langenkamp for years.  I have met her a few times at various conventions and I think she is incredibly cute.
Jacques Baron of Resistance Pro met her at Days of the Dead a few months ago.  He got the picture below and he proclaimed that she is "hot."  I cannot disagree.  Jacques is a great judge of talent.
As co-owner of R Pro, Jacques deals with a lot of talented wrestlers on his roster.  He also deals with hundereds more who want to be in R Pro.  He must be doing something right, because R Pro is going stronger than ever as it enters its third year of business.  One might say that R Pro is "hot."
Is R Pro hotter than Heather?  I know that is a tough question and hard to actually compare.  I have spent a lot of time at R Pro events, talking to the talent and watching the action.  It would only be fair for me to spend that much time with Heather and then judge things.  Oh I like my chances of accomplishing that, but I can dream.
Maybe I should just rely on the big smile Jacques has.  Then again, I usually see that same smile after every R Pro show.
I guess we can just call it a tie, but if Heather wants to plead her case, I am open to accompanying her to an R Pro event.  Now that is a perfect evening! 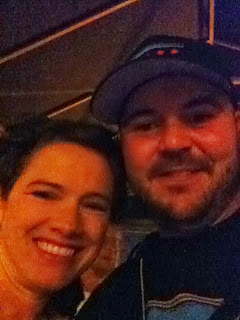 Heather Langenkamp and Jacques Baron in Schaumburg, IL-November 2013.
Posted by Johngy at 6:00 AM